Usage, Death, and other MDMA Statistics

One of the more exaggerated aspects of MDMA (Molly, ecstasy) use is the perceived rate of death and injury. The graph below shows the number of Emergency Department visits associated with MDMA.  (Data was collected by the US Substance Abuse and Mental Health Services Administration.) 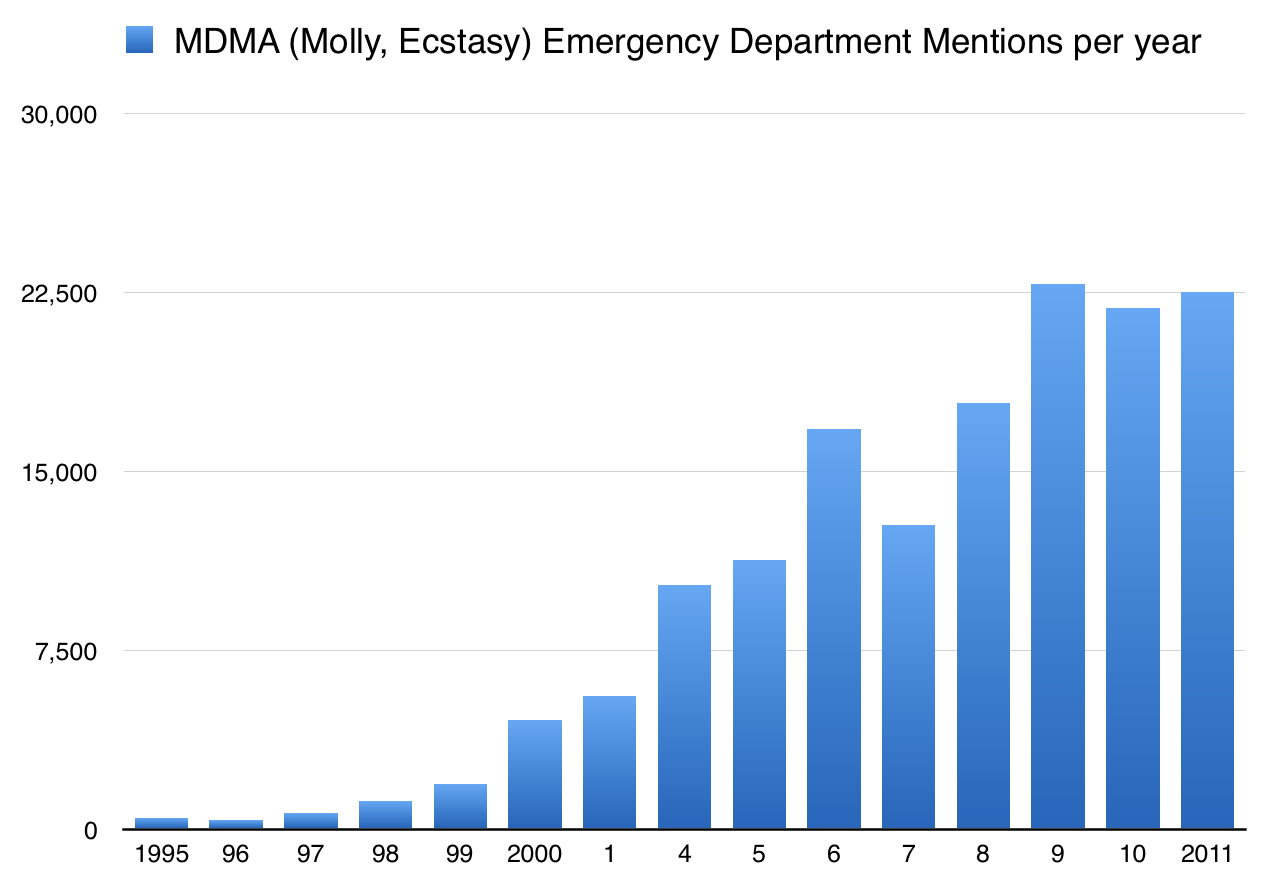 The thought of over twenty thousand MDMA users near death’s door being hauled in by ambulances is certainly troubling. But…the data doesn’t mean what it seems to imply at first glance. Look at the “marijuana” column in the chart below: 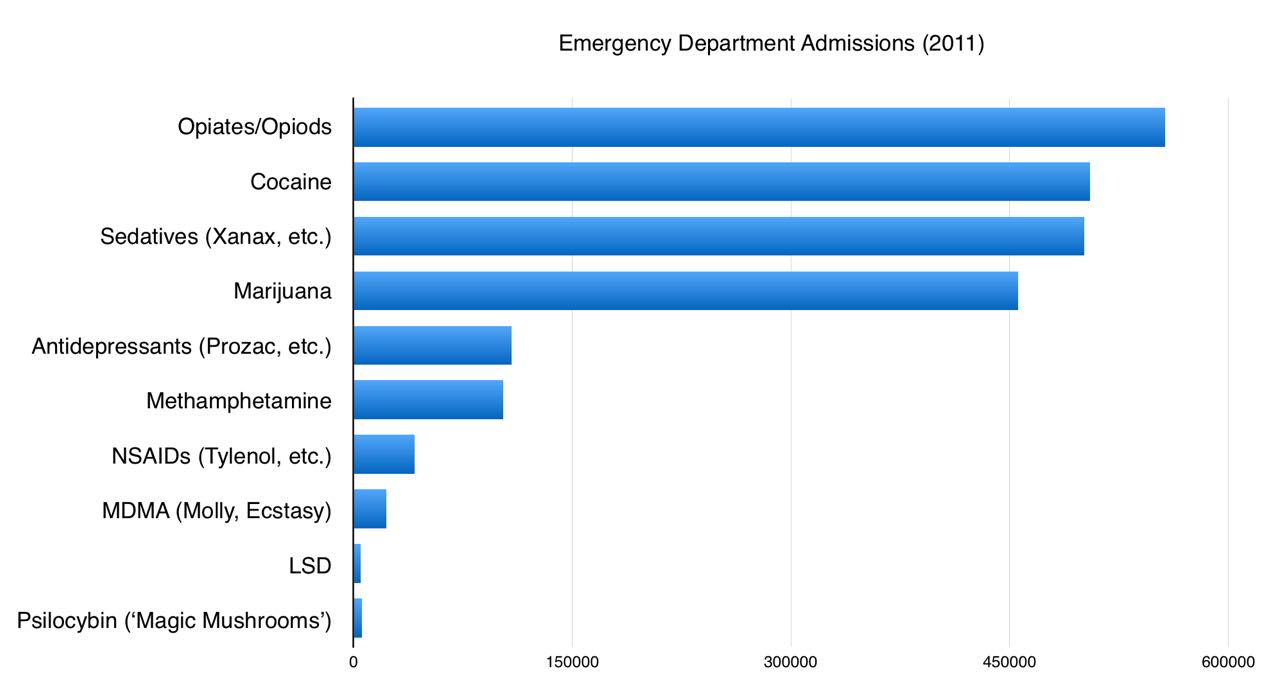 Looking at the bigger picture, for every case where MDMA was allegedly present, there were about twenty marijuana-related cases. How can this be? Marijuana is extremely safe; the vast majority of these people were clearly not in medical danger. The explanation is that people on psychoactive drugs often come to the hospital because they think something might be wrong; they get scared. With MDMA, a lot of ‘got scared’ stories appear to be happening. A study of ER admissions in the Netherlands found that, of the patients there for some complaint related to ‘ecstasy’, most (89%) did not require treatment beyond the initial visit/talk with a doctor.[1] More recent DAWN data shows the same trend; only about one in ten people who go to the hospital are admitted for treatment; the rest are sent home.  Most ER cases also involve alcohol. [2] (If you feel something might be wrong, either with yourself or somebody else, do not hesitate to seek medical attention. Maybe it’s nothing serious, but better to be safe than sorry.)

Numbers alone don’t really tell the whole story, however: Where things get interesting is not how many users encounter medical problems, but why they do. The distribution of injuries and deaths is not random throughout the user population; it is associated with specific risk factors and behaviors. (Read the rest of the Science section for more information.)

Most of the people that show up in the ER, even those in genuine medical danger, will make a full recovery. Most…but not all. Unfortunately, MDMA-related deaths have become a somewhat regular occurance (although still very rare compared to things like alcohol, tobacco, heroin, etc.)

Deaths where MDMA was detected or reported (from the Office for National Statistics, UK): 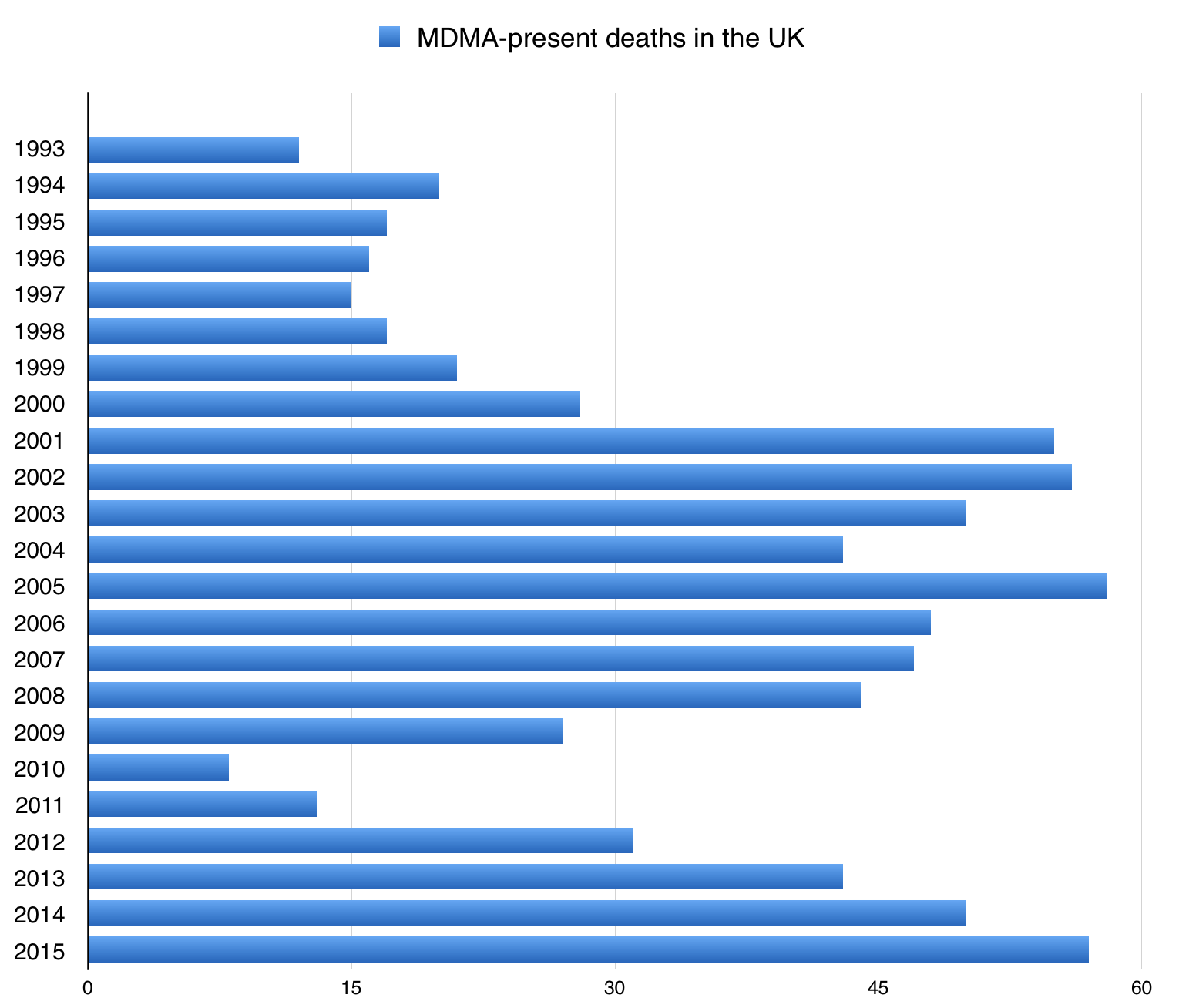 It’s important to keep in mind that the basis of reporting a death as “associated with MDMA” is not that it was caused by MDMA; rather that it was caused by drug use, and one of the drugs present was MDMA. This is a slippery distinction. For instance, if a person takes MDMA and drinks at a party, then, hours later, drives drunk and is killed in an accident, the death would be reported as MDMA-related.  The 2001 SAMHSA data came with some more information: A listing of all the drugs involved in each case:

As expected, amphetamine and methamphetamine made a showing. Somewhat surprising to me were the high numbers of cases involving cocaine and opiates (heroin, oxycodone, ect.) Out of a total of 76 deaths where MDMA was detected, only 9 involved MDMA by itself. (Although it seems unlikely that cannabis was a significant factor in deaths.)

In one study in the UK, of 81 deaths where MDMA was present, only six died from simple MDMA toxicity/overdose.

The leading causes of actual MDMA-related death are complications of “malignant hyperthermia/hyperpyrexia”…what most people would call Heatstroke. Perhaps the second most common cause of death (significantly less common than heatstroke-related) is Hyponatremia, sometimes called “water intoxication.” Even rarer causes of death are due to underlying health problems (heart disease, etc.) being aggravated by MDMA’s stimulant effects and a few ‘misadventure’ deaths (falls, etc.) Fatal cardiac arythmias have been claimed, but seem to be unreported in the case studies.

Equally important in considering risks is that, while being a pack-a-day cigarette smoker is always dangerous, most of the people that died as a result of their MDMA use did something extra to cause their demise. An informed MDMA user is unlikely to be a hyponatremia death. No responsible MDMA user is likely to be a ‘driving under the influence’ or drug mixing death.

Some people have objected to this comparison, saying that one beer or one cigarette is not as dangerous as one pill of MDMA. While that’s true, my interest is (quite justifiably, I think) the overall risk posed by the lifestyle, not per-unit risks. Yes, smoking a single cigarette is probably safer than taking one ecstasy tablet, but that’s not the way real world users behave. The smokers don’t stop at just one cigarette and the drinkers don’t stop at just one beer. The statistics shown here mean exactly what they say: Your odds as an MDMA user of being killed from your MDMA use are a very small fraction of your odds as a smoker or drinker of being killed as a result of your smoking or drinking.

Rates of Use of MDMA (‘Ecstasy’)

When it was first scheduled, MDMA was something of niche drug. Tens of thousands had probably tried it, but it hadn’t made a big splash on the national drug scene. After scheduling, MDMA began an almost geometric pattern of growth before dropping back down to what has become the long-term normal level of use (with about one in twenty children having taken MDMA by the time they graduate from high school.) 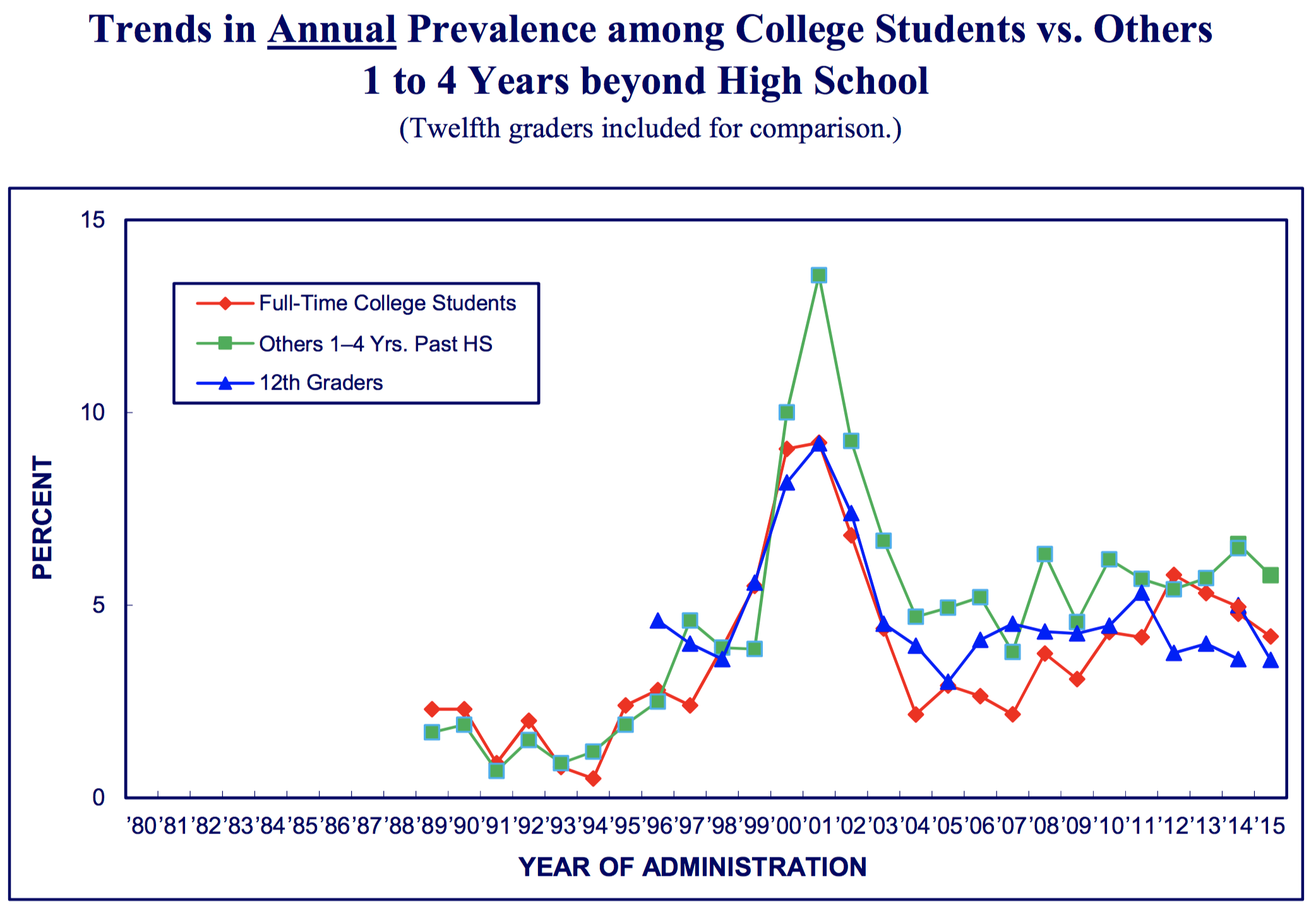 As shown in this graph from the Monitoring The Future survey, use of MDMA by teenagers and young adults saw extremely strong growth in the late 90’s, with use by high school seniors more than doubling just from 1998 to 2000.  Apparently the initial surge of popularity wound down in around 2003. Usage levels have since settled down into a fairly consistent last-year usage rate of around 4-5%.  As validation of the surveys, the 2002 drop is consistent with declines in MDMA-involved emergency room visits for 2002.

Generally, men are more likely to use drugs than women, but for MDMA the effect is relatively small, showing a similar level of appeal to both sexes. 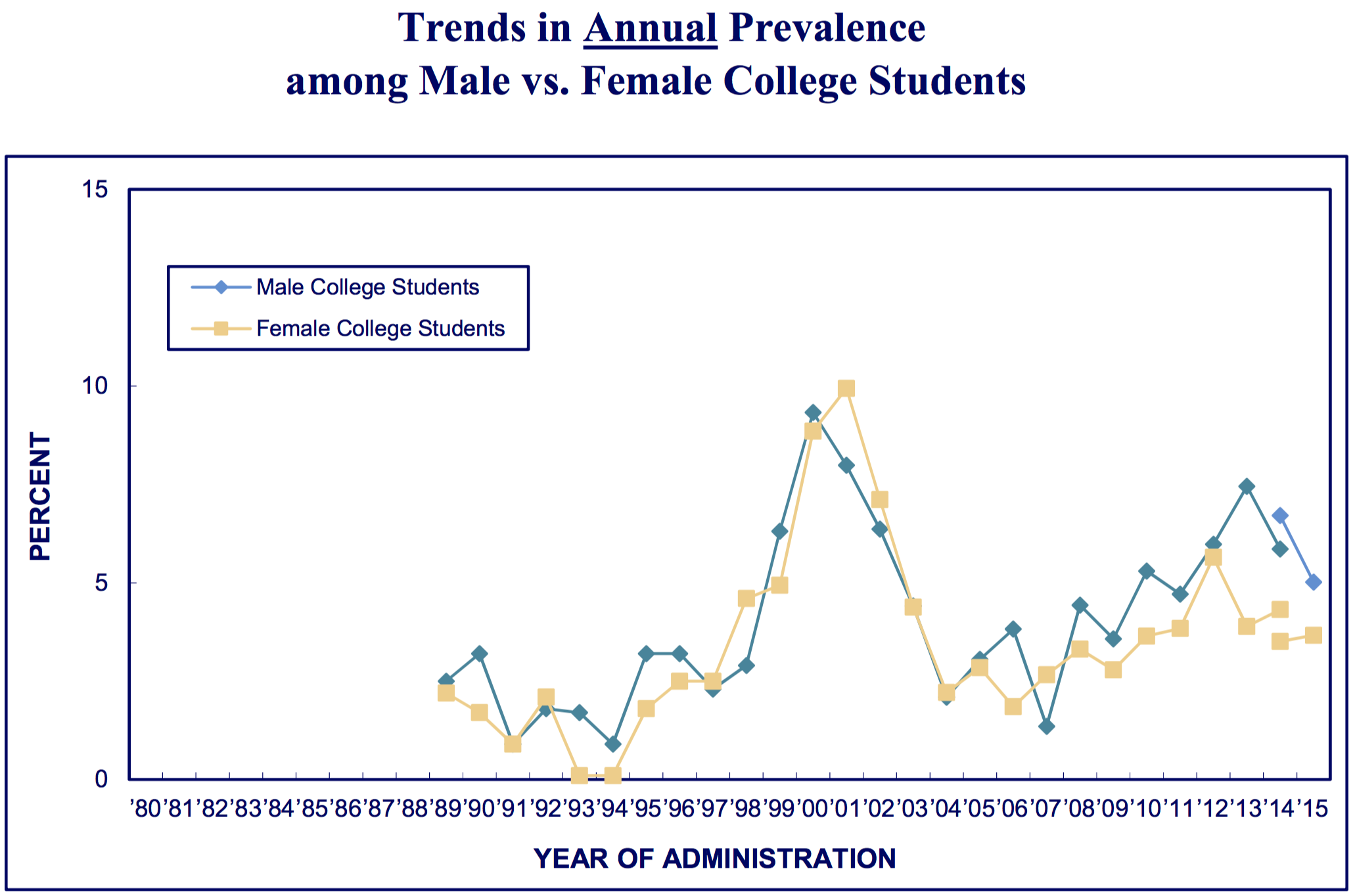 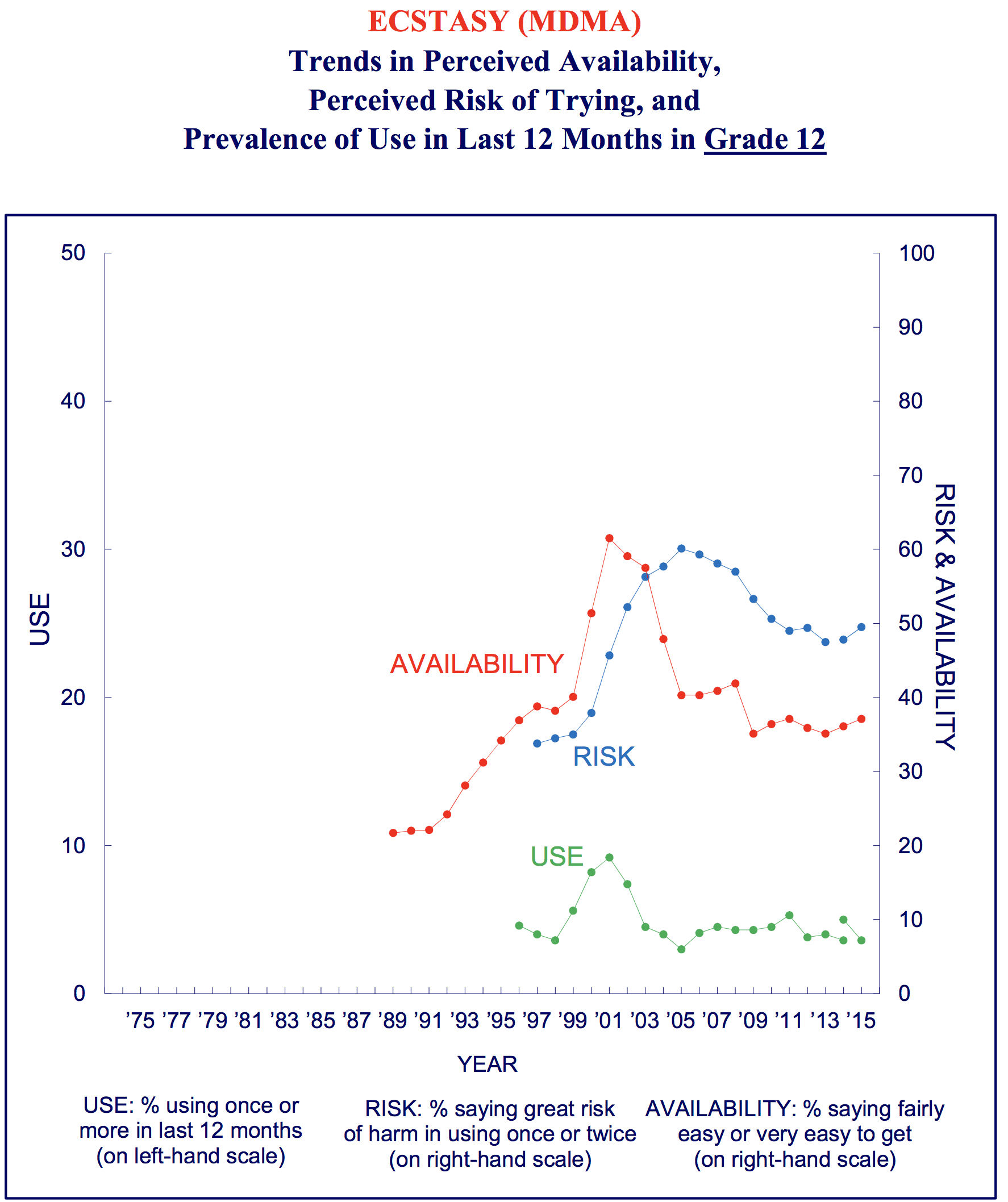 The percentage of young adults (ages 18-30) who believe trying MDMA “once or twice” would be harmful has been remarkably consistent, hovering around 50%.  This may represent a general wariness of drugs rather than specific opinions about MDMA.

Other data from MTF:

• In 2001 at the 12th grade level, Hispanic students were slightly more likely than white students (13.1% vs. 12.4%) to have tried MDMA, while only a small number of black students (3.1%) had tried the drug. (Perhaps surprisingly, rates of drug use by black teenagers are much lower than for whites in almost all categories, including crack cocaine. Why then are our prisons crammed with black drug offenders?)

• Among college-aged people (1-4 years past high school) the lifetime prevalence of MDMA use was approximately 16% (people attending college were somewhat less likely to have tried it.)

• Males are somewhat more likely to have used MDMA than females.

• Distribution of use is fairly even among all regions of the US (except for the south which had significantly less use) and all parental educational backgrounds (children of the least educated parents were less likely to have used.)

• Major cities had ~60% more past-year use than small towns.

[2] Substance Abuse and Mental Health Services Administration/DAWN Emergency Department data.[3] Death numbers are based on ‘rough justice’: The US Centers for Disease Control reports over 100,000 alcohol related deaths per year, with close to 200 million Americans using alcohol. CDC also reports over 400,000 smoking related deaths per year out of about 100 million smokers. The ‘ecstasy related’ drug deaths number is based on an assumption of about 60 deaths (in all probability there were only a handfull of purely ‘ecstasy’ deaths) out of a user population of about 3 million (based on the 2000 National Household Survey on Drug Abuse Statistics, conducted by SAMHSA.)