For better or worse, drug tests have become a fact of life for many employees (often as a condition for being offered a job, although people with safety sensitive jobs may be regularly re-tested over the course of their career.)  Drug testing can be a surprisingly involved process, with a lot of regulations and procedures to be followed before an employee is judged to have failed their drug test.  Test results are usually very accurate, but people are always finding new ways to try to beat the tests with varying degrees of effectiveness.

The standard “NIDA 5” drug test in the US (used by the government and many others) tests for marijuana, cocaine, opiates, amphetamines, and PCP.   (Why an unusual drug like PCP?  It’s a historical quirk; PCP was ‘the latest scary drug threat’ when the regulations were written.)  Tests for many other drugs are available, but less commonly used.

If you’re an MDMA (molly, ecstasy) user you might think you’re in the clear, since the standard test doesn’t check for MDMA.   But, it’s not that simple:  MDMA can show up on the amphetamine test (as can some over-the-counter medications like psuedoephedrine.)   If that happens, a more sensitive (confirmation) test will be run, which will correctly identify the MDMA in your system.

MDMA (molly, ecstasy) can usually be detected by a drug test for around 2-4 days after use, depending on the amount taken, your metabolism, and other factors (like how much water you’ve had to drink recently.)  How long MDMA  (ecstasy/molly) remains in your system is a surprisingly hard question to answer; although most of the drug will be gone in a few days, tiny traces can remain for months (such as in hair fibers.)  Drug elimination is a continuous, gradual process, not something with a sudden finish line.

The drug tests sold online and at pharmacies are generally the same as the screening tests used by drug testing labs. If you are concerned about whether you might pass or fail a drug test, an easy way to get a better idea is to simply give yourself a drug test at home.

Drug testing normally begins with a quick and inexpensive screening test, using a sample of urine, saliva, or a swab taken from your skin.  (Most employers use a urine test.)  Screening tests are moderately reliable; they usually give an accurate result (negative or positive) for a particular drug.  But, they can mistake other drugs or medications for the drug being tested for.  They also will not detect low levels of a drug in your system, so somebody who still has a little bit of (for instance) cocaine in their system from partying on the weekend might still pass the test.

Typically, the person being tested will be given a cup to urinate in and allowed to use a private bathroom that has had the water faucets turned off.  Once you hand over the urine sample, they will begin to test it.  First, they’ll test for sample validity (is the sample real, unaltered urine from the person being tested?)  If the sample tests as valid, it gets tested for the presence of drugs.

The validity checks are looking for a number of things:

Temp: The first validity test is usually a simple temperature measurement.  A sample that isn’t at a normal human body temperature might have been substituted (for instance, by the person sneaking in a small container of somebody else’s urine.)   An abnormal temperature of the urine will cause the sample to be rejected.

pH: The pH (acidity) of the urine sample will be checked.   If it’s too high or low, the sample will be rejected as having possibly been tampered with.  Bleach and a number of ‘pass your drug test’ additives will cause the sample to fail this test.  (A number of things that once worked no longer do; the testing companies keep working on ways to catch ‘cheat’ products.)

Oxidizers and other adulterants:  Special tests are often done to double-check for anything unusual that might have been added to the urine to keep the drug test from working.  Trying to pass a drug test by adding something to alter the sample probably has a low chance of success, and a clearly altered sample may be treated as a failed drug test.

Dilution:  The lab will check for levels of creatinine, an amino acid produced by your body from creatine.  They’ll also check the specific gravity (essentially salt content) of the urine.  If creatinine levels and specific gravity are too low (usually because of a urine sample being highly diluted such as from drinking a lot of water before giving the sample or from adding water to the sample from a faucet or other source) the sample will be rejected as too dilute to be tested.

A “too dilute” result isn’t the same thing as a failed test, although it isn’t a passing result either.   If a sample is rejected for being too diluted, the lab will typically ask you to come back to take another drug test (unless there is evidence that the sample was deliberately tampered with (such as by adding something to it), in which case they may treat it as a failed drug test.) 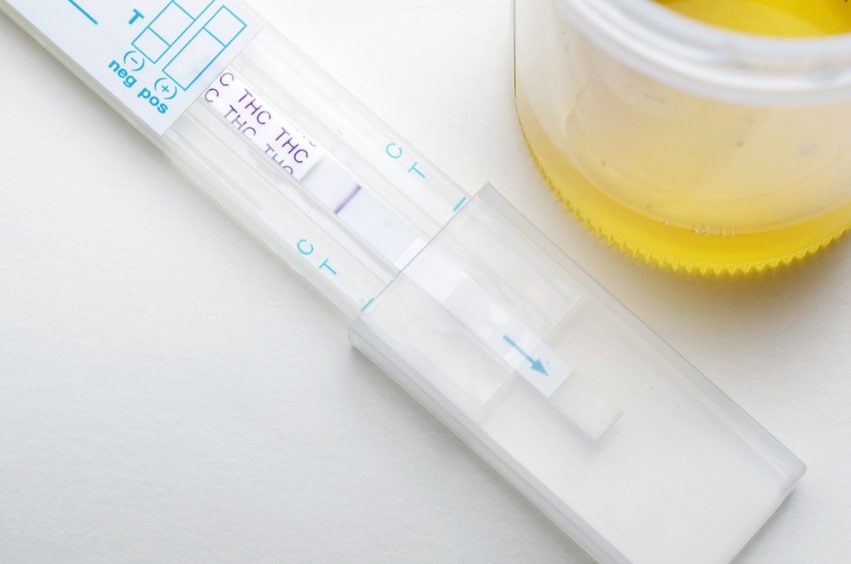 If the urine sample passes the validity tests, it gets tested for the presence of drugs.  Most screening tests use a method similar to a pregnancy test, where a test strip is dipped in the urine; a positive test will cause a different pattern of lines to appear.

If a sample tests positive for a drug, the urine will be tested again, this time with sophisticated lab equipment that can conclusively identify which drugs are present and measure the levels of each drug.  Confirmation tests are more expensive and time-consuming to run, which is why they’re usually only used on samples that have already failed the screening test.

The process is similar with hair and saliva samples; a screening test is typically used to get a quick indication, with a more sophisticated lab analysis used on samples that fail the screening test.

If a test comes back as having been positive for a drug, the results are given to the company’s Medical Review Officer (a doctor who might be an employee of your company or who might be working independently, such as at a clinic.)  The MRO’s job is to make the final decision on how the results are reported to your employer.  Part of their job is to make sure that anything that you test positive for was actually used illegally.   For instance, if you test positive for codeine (an opiate) but are taking it as prescribed by a doctor, then the MRO’s report to your employer would still be that you passed the drug test, since the codeine wasn’t being taken illegally.   If you believe the results reported to your employer are inaccurate, you should talk to the Medical Review Officer.

The quest to beat drug tests

For as long as there have been drug tests, there have been people desperate to find out how to beat a drug test.   Some popular ‘methods’ never worked (such as taking Goldenrod supplements.)  Some things used to have a chance of working but will be easily caught by modern screening tests (such as adding bleach to your urine sample.)  Still, for infrequent users (such as the person who popped a pill Friday night and finds out they have a drug test Monday) there are some methods that might make the difference between a passed or failed drug test.

One of the most common things people have tried is simply drinking a lot of water (or other liquids) before the test to dilute their urine (reducing the concentration of drugs in it, hopefully to the point that the screening test won’t detect the drug.)   Since this can cause a sample to be rejected for being too dilute, drug users have sometimes turned to ways to beat the dilution validity tests.   Since creatinine levels are a standard test for dilution, some people have taken creatine supplements (sold for athletes) to try to raise the level of creatinine in their urine to normal levels in spite of having been diluted through heavy fluid intake.   This may or may not be effective.

A watery-clear urine sample that still passes the creatinine test could be considered suspicious by a lab, so users have also looked for ways to add back ‘normal’ urine color, such as by taking a vitamin B12 supplement, which turns urine yellow.

The advantage of trying to dilute your urine this way is that, since you aren’t adding anything strange to the sample itself (such as bleach or tap water) it won’t show up as an obviously altered sample (which is often considered to be a failed drug test.)  Instead, if the lab rejects the sample as too dilute, you will often get a chance to re-take the drug test, giving your body a bit more time to eliminate more of the evidence.   Thus, dilution (by drinking plenty of liquids) is a fairly safe approach to try.   Some people have tried diuretics (such as Midol, an over-the-counter medication used to control menstrual water weight gain/bloating) as a way to increase urine production.

Very heavy consumption of water can be dangerous.   Sports drinks may be a better option, both to reduce the risk of water intoxication and to increase the salt content of the urine (to make it less likely to fail the dilution checks.)

The numerous ‘pass your drug test’ products on the internet are likely often just a combination of a drug to make you pee more (such as caffeine or a diuretic) and something to add color to your more dilute urine.   They may or may not work as advertised.

For chronic drug users (addicts and other heavy users) there’s often little chance of beating a drug test using their own urine.  This has led to sometimes strange and ingenious devices to smuggle in somebody else’s urine (or artificial urine) to put in the sample cup instead of your own.   The most famous brand includes a fake penis (to increase your chances of getting away with it if you are required to produce a sample while being watched.)    Although a bit cumbersome, these substitution devices can be an effective solution to passing a drug test.

On the one hand, it seems like drug tests might be futile against clever and determined drug users.  On the other hand, it may work as ‘security theater’, where the process scares off at least some regular drug users from applying for jobs that test.  Whether forcing your employees to pee in cups on command is good policy or not remains a matter of debate; very large amounts of money are being spent on testing to catch the occassional weekend pot smoker.